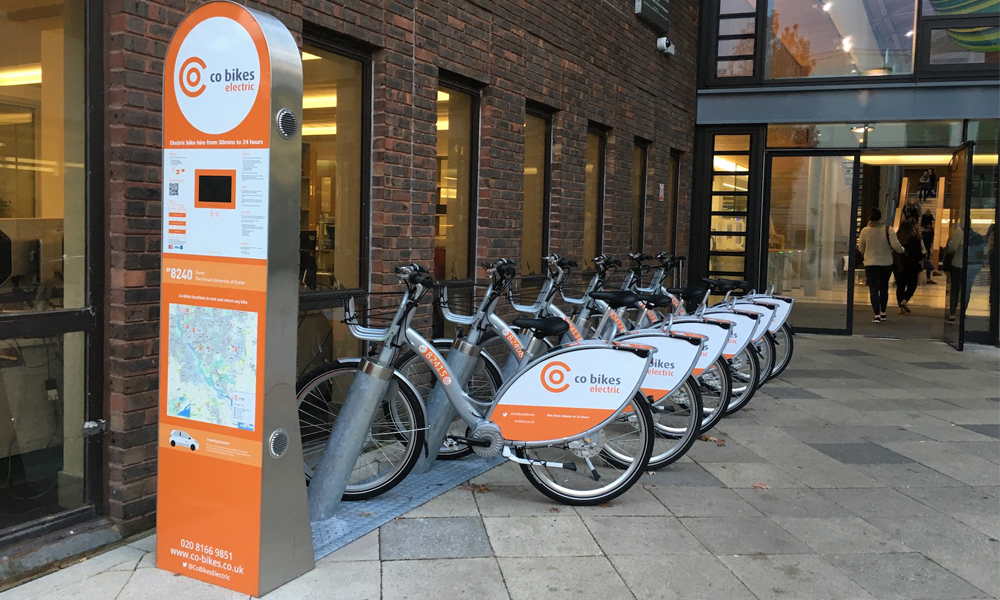 As a compact city, cycling is one of the best ways to get around Exeter - it allows you the freedom to explore both the city and the local area, from the quirky city back streets to the lush, green countryside of this wonderful county. Read on to find out more about cycling in Exeter today!

Is Exeter a good place to cycle?

Exeter is home to some of the best cycle routes in Devon, with a real variety that will suit newbies and experienced riders alike. From hilly ascents to meandering gently along the river path, check out our favourite cycle routes in Exeter below. Cycling in and around Exeter is safe, owing to the large number of bike lanes in the city itself, as well as the numerous bike routes weaving their way through the surrounding landscape.

I don’t have my own bike - is there bike hire in Exeter?

Don’t be put off cycling in Exeter if you don’t have your own set of wheels, as there are many places which offer bike hire in Exeter. Co Bikes have numerous locations dotted in and around Exeter, offering the opportunity to rent their fantastic electric bikes and ride wherever the wind takes you! One of the locations is handily located at the University of Exeter, just outside the Forum. It is quick and easy to rent a bike, as well as being great value for money. And don’t worry about cycling up the infamous Forum Hill- as the bikes are electric, so you’ll fly up it without even breaking a sweat! Check out Co Bikes’ top tips for safe cycling here.

This cycle route is a must for anyone wanting to get out of the city for a relaxing day of cycling, and more importantly, there isn’t a hill in sight! The trail starts in Exeter and winds its way along the River Exe all the way to Exmouth, 13 miles away. It passes through quintessential English villages such as Lympstone and Exton, home to a great variety of cafes and pubs if you need to replenish energy reserves along the way. As long as you keep the river on your right, it's impossible to get lost on the way to Exmouth, and the well-paved surface makes for easy riding, allowing you to marvel at the wonderful estuary views and wildlife along the way. Stay for fish and chips in Exmouth to refuel before the cycle home, or get the train back and drop off your Co Bike at Exeter St Davids train station to complete a great day out.

Exeter to Dawlish Warren along the Exe Estuary Trail

If you liked the trail from Exeter to Exmouth, then why not try the route on the other side of the river? Smooth tarmac takes you along the whole way to Dawlish Warren, past the majestic Powderham Castle with herds of deer roaming the grounds, and hedgerows and marshlands teeming with wildlife. Don't forget the all important refreshment stop on the way, with Turf Inn providing a perfect halfway stop. Once at Dawlish Warren, sink your feet into the soft sand and treat yourself to an ice cream to reward yourself for the ride.

For cyclists wanting a little more of a challenge, but nothing too strenuous, then look no further than the 18 mile loop from Exeter to Thorverton and back. Escape the traffic of the city to quiet and car-free roads and take a ride through the lush, verdant scenery which Devon has to offer.

Stop to take a breather just outside of Thorverton village and look back over the rolling hills to Exeter. Stop in at the welcoming Exe Valley Farmshop for some local produce and then it’s all downhill on the way back to Exeter.

Hopefully this has given you a flavour of the cycling available in and around Exeter: there really is something for everyone. Go and collect your Co Bike today, and get exploring!